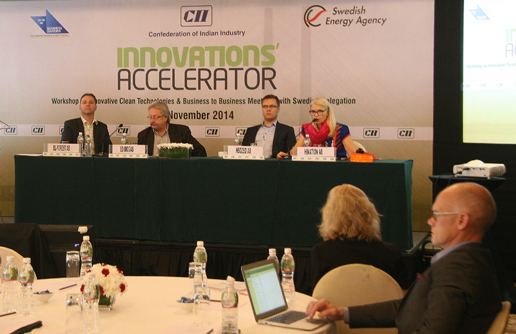 Swedish companies reach Mumbai for the last stop of this visit. The last ten days has brought partnerships closer and gone a long way to build trust between India and Sweden actors.

The last stop on the FG3 road tour was Mumbai on November 3rd 2014. The workshop opened with an address from Ms. Fredrika Ornbrant, Consulate General of Sweden in Mumbai. Ms Ornbrant made clear that renewable energy was the need of the hour. Using Sweden as her example, she emphasised that alternative fuel development would not come at the cost of economic growth. Pointing out that India is the fourth largest energy consumer with a large percentage of the country still lacking acces to power, Ornbrant emphasised that “international collaborations on alternative energy development could become one of the most significant factors to deal with the power crisis, and growing energy demands”.

Eight Swedish companies participated in the conference which was held at the Hotel Palladium, Mumbai. Klas Svensson, Senior Policy Advisor, Swedish Energy Agency commented that “while selecting the companies to bring here, we tried to make sure that these companies cater specifically to Indian needs”, this mutual interest was evident from the list of B2B meetings each company had lined up. Svensson added that, “the collaboration between India and Sweden brings together long-proven experience in technolgies such as biogas and geothermal energy, with global ambition to be a leader in the green, global economy for decades to come.”

The value of the technologies being put forward were no longer in question, and discussions went deeper to deal with the nuts and bolts of developing sustainable partnerships. Mr. KN Rao the Director -Energy and Environment of ACC Limited showed interest in almost all the products. He said “things take time in India because of  red tape-ism  and slow and long bureaucracy process.” For this reason, it becomes important for Indian companies to know that their timeline for returns on investment make sense in the Indian context. Indian companies present were optimistic about the continued potential of international partnerships. Dr. MG Palekar from Step was sure that sustainability as an Indian priority would continue to grow in importance, and about the opportunities being created with the new Government, “in the coming years it will be easier for Indian companies to collaborate with the foreign companies”.

After the meetings almost all the Swedish companies agreed that they did not expect collaboration in just one meeting. This trip was a meeting point, which will lead to constructive collaboration. This concept of repeated interaction, bridged by communication through web portals and webinars, is precisely the premise of the India Sweden Innovations’ Accelerator. Manik Karn of Business Sweden, a partner to the Accelerator, said he sees lots of potential in India. “A small or medium scale industry in Sweden finds India a very far off country. We are trying to bridge this gap by spreading awareness about India in Sweden and vice versa”

Indian representatives talked about their need to see demonstrations of technology in the field, in order to be able to understand how this can best suit their needs. Speaking of the technology put forward by solar company Hi-Nation, Rajesh Deshpande, the Director Pritvi Technologies, said “it will be only interesting for us if they agree to start a manufacturing plant here in India.” Hi-Nation is now looking for an Indian partner in order to be able to manufacture domestically. Georg Svensson of Mimer Energy AB commented on the need for India to see what they want to buy, “Indians like to feel, touch and see things, but for geothermal technologies it is mostly underground and cannot be seen from outside.” Mimer Energy AB has recently completed a project as design and installation consultant for the Defence Research and Development Organisation (DRDO) for their Snow and Avalanche Study Establishment in Manali.

This visit comes to an end, but with it there is a strong sense of possibility between India and Sweden. Ludvig Lindström, Country Manager, India concludes with, “this delegation visit to India has deepened every actors’ engagement and understanding on how to work with bilateral business partnerships, in India. Such understanding is part technology and part trust, and we are very lucky to be able to develop such tie-ups between India and Sweden.”