The sky is the limit; India’s solar ambition set to increase pace 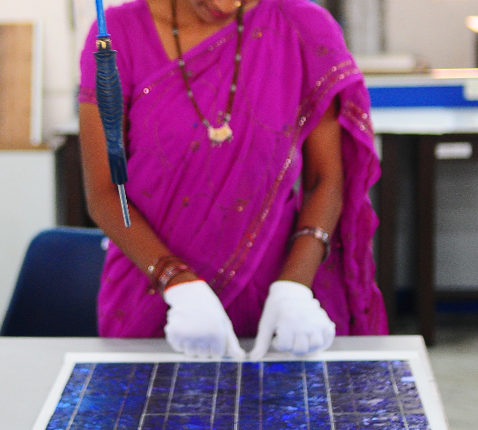 India’s Prime Minister has an impressive track record of state solar energy development. This looks set to be replicated at the national level.

India’s surface area receives large amounts of solar radiation, making it highly conducive to the generation of solar power. India’s solar programme, launched in 2010, set a goal of deploying 20,000 MW of grid-connected solar power by 2022. The mission includes research and development, a thorough policy framework, technology innovation, and domestic production of materials such as silicon wafers, solar collectors, storage systems and other solar photovoltaic equipment. The aim is to produce solar power at costs competitive with fossil fuel-based energy, in order to curb climate change, employ at least 100,000 specialized personnel, and achieve energy security and access.

States have set their own targets, with Gujarat at the forefront of solar policies. Gujarat initiated Asia’s largest solar park in Charanka village. Solar panels installed atop the Narmada canal will generate 1.6 million units of clean energy per year, and prevent 9 million litres of water from evaporating, increasing water security for poor farmers. Gandhinagar, heralded to be a solar city for its rooftop solar power project, will be a model for other cities with ample sunlight, such as Delhi. Gujarat’s Chief Minister and current Prime Minister, Narendra Modi seems a promising candidate to provide adequate government support to actualise these ambitious solar power targets. The Ministry of New and Renewable Energy plans to build transmission infrastructure and allocate land in selected states for solar parks. State governments will also be given incentive for using state-controlled land for solar parks. Solar power will be supplied to the national grid along with thermal power, and routed to cities with solar parks. Subsidized interest rates on loans and zero import duty on raw materials will further incentivize investors.

Alongside the development of solar power, the Ministry of Power and Coal also plans to expand coal power, to meet India’s growing energy needs and supply electricity to hundreds of villages. To fund renewable energy, the government has doubled the tax per metric ton of coal mined or imported from ₹50 to ₹100. This revenue will be used to finance the National Clean Energy Fund, which will develop renewable energy projects. Incentives are given to shut down outdated and polluting coal plants. Still, the expansion of coal is met with international criticism, and there is a pressure on developing nations such as India to reduce coal dependency and shift to clean technologies and renewable energy. As the UN Climate Conference approaches in December and the new government’s energy policies are set in motion, decentralised energy solutions like biogas, bio-fuels, and solar power are gaining importance in both policy and market.

Smart Grid: Its all relative

Prices paramount in the clean energy debate
Scroll to top